Sunflowers, Insects, The Milky Way and the week that was.

Sunflowers and Insects and the Milky Way, oh my. 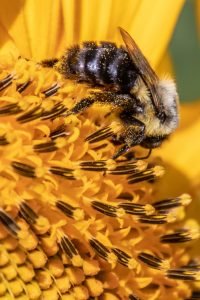 So in the last week I went out and shot sunflowers, insects and cranes with Christina. I got some shots of honey bees and a nice one of a Monarch Buttery. There are also new photos available in to be viewed in several of the galleries, but if you want to cut to the chase the Sunflowers are HERE and the Insects HERE. I have finally finished uploading my photos from the last couple years and now it is time to work on captions and other parts of the web page.

Since the moon was small and the skies were clear I attempted to take some photos of the Milky Way.  I chose my widest lens at its largest aperture, calculated the shutter speed for the lens (based on the 500 rule), decided on a location and headed out. I consulted Dark Sky Finder for a location near me with as little light pollution as I could get. Well, I ended up in the middle of no where, surrounded by a chorus of noisy insects and the feeling that I just entered a scene from a slasher movie. After setting up the camera on my tripod and letting my eyes adjust to the dark, I snapped my first picture…and the built in flash went off. Well I turned that off, then tried again. I ended up taking about 40 photos, both portrait and landscape and from multiple spots in the place I was parked (there was a farm with light on that I tried to block out using taller plants). I also took multiple image to stack several times.

When I got back home and looked at them on my computer screen I was disappointed. The photos were much nicer on the camera’s LED screen than when viewed larger. My photos had massive graininess, even when stacked. It wasn’t a waste of time by any means, it was instead one step in a learning process. After some more research, I should have used a faster lens and probably my full frame camera instead of my Canon t7i. Also, I probably need a place with less light pollution lucky for me I will be in such an area later this week. Hopefully everything will go better, the night sky will be clear and I will be able to post some Milky Way photos. Until next time, keep snapping that shutter.